The History and Legend of the Poinsettia 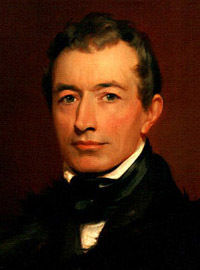 g historywoven in a combination of legend, politics, and a beloved embassador.

Native to Central America, the plant flourished in an area of Southern Mexico known as Taxco del Alarcon. The Aztecs used the plant decorative purposes but also put the plant to practical use. They extracted a purplish dye for use in textiles and cosmetics from the plant’s bracts. The milky white sap, today called latex, was made into a preparation to treat fevers.

The poinsettia may have remained a regional plant for many years to come had it not been for the efforts of Joel Roberts Poinsett (1779-1851). The son of a French physician, Poinsett was appointed as the first United States Ambassador to Mexico (1825-1829) by President Madison. Poinsett had attended medical school himself, but his real love in the scientific field was botany. (Mr. Poinsett later founded the institution which we know today as the Smithsonian Institution). Poinsett maintained his own hothouses on his Greenville, South Carolina plantations, and while visiting the Taxco area in 1828, he became enchanted by the brilliant red blooms he saw there. He immediately sent some of the plants back to South Carolina, where he began propagating the plants and sending them to friends and botanical gardens. Among the recipients of Poinsett's work was John Bartram of Philadelphia, who in turn gave the plant over to another friend, Robert Buist, a Pennsylvania nurseryman. Mr. Buist is thought to be the first person to have sold the plant under its botanical name, Euphorbia pulcherrima. It is thought to have become known by its more popular name of poinsettia around 1836, the origin of the name recognizing the man who first brought the plant to the United States.

Congress honored Joel Poinsett by declaring December 12th as National Poinsettia Day which commemorates the date of his death in 1851. The day was meant to honor Poinsett and encourage people to enjoy the beauty of the popular holiday plant.

The Legend of Pepita & Poinsettias

The Poinsettia also gains its popularity with the legend of Pepita, a young girl with a gift for the Christ Child.

A charming story is told of P 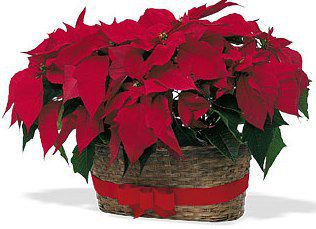 epita, a poor Mexican girl who had no gift to present the Christ Child at Christmas Eve Services. As Pepita walked slowly to the chapel with her cousin Pedro, her heart was filled with sadness rather than joy. I am sure, Pepita, that even the most humble gift, if given in love, will be acceptable in His eyes," said Pedro consolingly.

Not knowing what else to do, Pepita knelt by the roadside and gathered a handful of common weeds, fashioning them into a small bouquet. Looking at the scraggly bunch of weeds, she felt more saddened and embarrassed than ever by the humbleness of her offering. She fought back a tear as she entered the small village chapel.

As she approached the altar, she remembered Pedro's kind words: "Even the most humble gift, if given in love, will be acceptable in His eyes." She felt her spirit lift as she knelt to lay the bouquet at the foot of the nativity scene. Suddenly, the bouquet of weeds burst into blooms of brilliant red, and all who saw them were certain that they had witnessed a Christmas miracle right before their eyes.

From that day on, the bright red flowers were known as the Flores de Noche Buena, or Flowers of the Holy Night, for they bloomed each year during the Christmas season and thus, the legend of the poinsettia was born.

Forinformation on how to care for your holiday poinsettia and tips to re-bloom your poinsettia visit our Poinsettia Care Tips Page.

Or for your own, fully bloomed Christmas Poinsettia, check out our selection here.